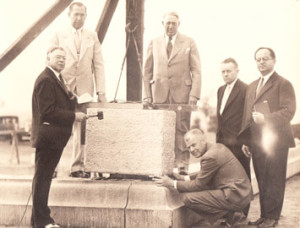 Established in 1925, Acacia Park Cemetery sits 350 feet above the Mississippi River, just south of the Mendota Bridge across from historic Fort Snelling.

Pilot Knob, the plateau on which Acacia Park is situated, was an early 19th Century viewing point for such frontiersmen as Zebulon Pike and Josiah Snelling. Indians often insisted that agreements be signed there because it was the site “closer to the heavens”.

Its majestic aura continues to impress visitors with the same peace that infused the Native Americans many years ago. 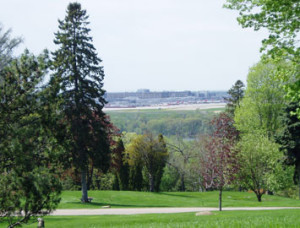 View of Northwest Airlines in skyline

Acacia Park offers 23 different sections of  property, each like the park itself, named  after a  type of tree. Ash, oak, pine, maple, elm, locust and  linden are among the varieties dressing the park’s  rolling terrain. A stone chapel, built in the 1930s with  stone from the old St. Paul courthouse, provides an  added remnant of a historical era.

Visitors to Acacia Park are greeted by a 40-foot steel bell tower donated to Acacia Park for the enjoyment of all visitors by Eva  Hope Miller in memory of her husband Major General Ray S. Miller. 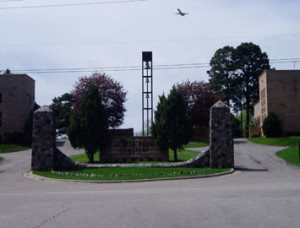 The bell tower stands eminently in the main courtyard and its symmetrical grace lends a ceremonial harmony to the memorial grounds.

The Audubon Society recognized Acacia Park for its bird sanctuary, which attracts thousands of birds each year, including bright red Cardinals who are especially splendid against the white and evergreen blanket of winter. The cemetery is also home to deer, wild turkeys, fox, and albino squirrels.